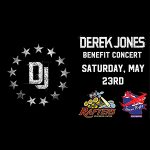 Derek Jones is an up-and-coming country star that headed to Nashville from Hartford, Indiana in 2010. After completing his service to our country in the United States Navy from 1999-2003, Derek picked up a guitar and never looked back. With his distinctive signature-vocals and a music style that’s country-rock with an outlaw lifestyle, he has captivated audiences around the world while sharing the stage with Billy Ray Cyrus, Charlie Daniels, Trace Adkins, Dwight Yoakam, Jo Dee Messina, Joe Nichols, Alabama, Shooter Jennings and many more. Parade Magazine reviewed Derek’s live show and boasted, “With gritty, grizzled powerhouse vocals, bold songwriting talent and a dynamic live show, Derek Jones continues breaking the mold as a new artist.”

General Admission tickets are $10 presale and $15 the day of event. VIP tickets are available for $50 and include:

VIP’s are allowed early access at 5pm for the Meet & Greet and food buffet. VIP tickets will be limited and are available on a first come, first serve basis.