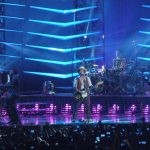 Bruno Mars is in a teaming up mood as of late. Last week he announced that he’s teamed up with Anderson .Paak to form the band Silk Sonic and their first song will drop Friday 3/5.

Now the 24K Magic singer is partnering with the clothing line Lacoste under the name Ricky Regal.

🎲 @ricky_regal @LACOSTE 🐊 I’m a gott damn fashion designer now! Catch me at a fabric store near you 🧵 🪡 pic.twitter.com/SC7SjDOQ4h

His new collaboration with the French fashion house will debut Friday and will feature 70’s inspired retro T-shirts, tracksuits, footwears and other accessories.

One thing is for sure Bruno Mars…I mean Ricky Regal is well on his way to becoming the millionaire.