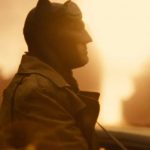 Yesterday we go our first look at “The Snyder Cut” of Justice League, which will drop next month on HBO Max after years of fans campaigning for Snyder’s Justice League to see the light of day.

You might be asking yourself, see the light of day? Yes, you see Zack Snyder was originally tapped to direct the 2017 movie but midway through filming he had to step down following the death of his daughter. Resulting in Joss Whedon taking over and completing the film which included re-shoots and adding humor to the film.

It wasn’t until rumors began circulating that a cut of Snyder’s version of the movie began circulating that fans began calling on Warner Bros. to release the alternate cut. However, the studio stated that they had no plans to release Snyder’s cut of the film until last May when Zack Snyder himself confirmed that his Justice League would be available exclusively to HBO Max. Check out the first official trailer of the Snyder Cut below.