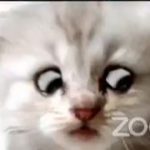 A Texas lawyer had a Zoom filter mishap this week when he appeared before a Texas court as a cat. Okay not a real cat but a filtered wide-eyed feline. He had no idea how to remove it going as far as telling the judge that his assistant was helping him to no avail and that “I am not a cat.”

HOW UNPURRFESSIONAL: A Texas lawyer had quite the mishap over Zoom on Tuesday. When the county attorney logged on for virtual opening proceedings, he appeared as a cat by "meowstake" thanks to a funny filter. The judge eventually helped him remove it. pic.twitter.com/SN1DsgVWE5

Judge Roy Ferguson finally helped Mr. Ponton remedy the situation and moved forward with the proceedings. One thing is for sure Mr. Ponton’s accidental cat filter will no doubt achieve viral immortality.

Following the mishap Judge Ferguson used this moment as a teachable one and gave some friendly advice to those who may be using Zoom right after their child.

IMPORTANT ZOOM TIP: If a child used your computer, before you join a virtual hearing check the Zoom Video Options to be sure filters are off. This kitten just made a formal announcement on a case in the 394th (sound on). #lawtwitter #OhNo @zoom_ushttps://t.co/I0zaj0wu6K