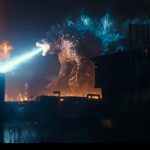 Finally after being delayed for a year we got our first look at Godzilla Vs. Kong!

After watching the trailer over the weekend it appeared as if Godzilla was going to be the villain in this movie. However, thanks to some very observant eyes on social media they began to point out that the main antagonist isn’t going to be Godzilla and that the real villain was hiding in plain sight at the 10 second mark in the trailer.

So who could the villain be in this battle of the ages? Well according to fans on twitter it is none other than Mechagodzilla! For those not fimilier with Mechagodzilla he was first introduced to the Godzilla franchise in 1974 according to gamesradar.com.

If these rumors are true this is going to be a really good move! If you haven’t checked out the trailer watch it below.

Who’s side are you on? Godzilla Vs. Kong hits theaters and HBO Max March 26th.