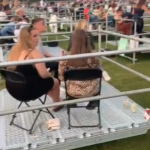 There’s a new arena in England that bills itself as the world’s first socially distanced concert venue.  Groups are separated in their own sectioned-off “pods”, with several feet in between.  They held a show there on Tuesday, and it seemed to work really well.

The UK’s first socially distanced gig is happening now in Newcastle with @samfendermusic headlining, and where attendees have their own private viewing area with 2m of space between them. Here’s what it looks like #samfender #unityarena pic.twitter.com/YBdxpAjYyi