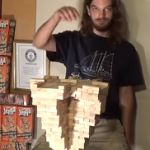 We had no idea this was even a thing, but now we do thanks to Guinness World Records.  An Arizona man named Tai Star Valianti set a Guinness record by stacking 485 Jenga blocks on top of ONE vertical Jenga piece.  It took him two hours.  He broke his own record from last year of 353 stacked pieces.