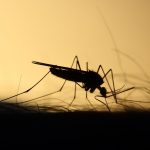 There’s a 48-year-old guy named Joe Rwamirama in Kampala, Uganda.  And he’s pretty famous around his home village for his FLATULENCE.  Because there’s something unique about his gas that KILLS MOSQUITOES.  He says no one in his village has EVER gotten malaria because his gas had created a mosquito-free zone with a six-mile radius.  And now Joe says an insect repellent company has contacted him . . . because they want to hire him so they can study his gas and figure out why it’s so effective.  Joe’s not sure quite WHY his gas works at keeping mosquitoes away, because it doesn’t harm people and, quote, “I eat ordinary food just like everyone else.”