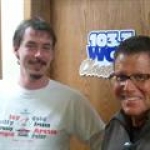 Did I ever tell you about the time I had a beer with Jake Leinenkugel? He was unveiling a couple of new brews from Leinenkugel Beer (Big Eddy and Snowdrift Vanilla Porter) and was going from city to city offering taste-tests to various members of the media. Upon meeting him, the first thing he said to me was, “You’re our first stop, so you’re lucky enough to be one of the first to try these”. I was elated. We popped a top on the Snow Drift and talked about how creamy and delicious it was. Then he handed me the Big Eddy.

I remember a slight pain as I went to twist the top off. Jake, showing some concern said, “Hey man, you’re bleeding. Did you twist that off?” Then he laughed, “That’s not a twist off! How did you get that off?” “I guess I was excited to try your new beer” I said. He then reached for his beer and tried to twist the top off with no luck. “I just don’t know how you did that”, he kept muttering as we finished our beer. “That’s a first!”.

So that’s the time I had a beer with (and bled with) the great Jake Leinenkugel. Jake was recently tapped for a Senior White House adviser roll for the Trump Administration. We who have had the pleasure of meeting Jake in person, couldn’t be more proud. Check out the story Here